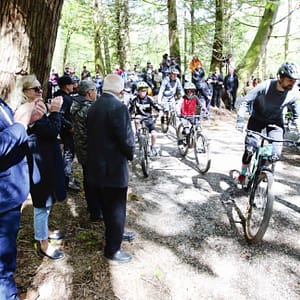 Ground was broken Tuesday to build a clubhouse at Langford’s Jordie Lunn Bike Park, while an extension to its trail system was also unveiled.

The park was named in honour of Jordie Lunn, an accomplished cyclist who died from a head injury suffered while trail riding in Mexico in 2019.

Langford Mayor Stew Young said the new trail system is designed to provide biking and hiking for people of all ages on more than 130 acres of land.

He said nine trails opened Tuesday and three more will be in place by the end of the year.

Cyclist Merin Pearce, 24, said the new trails will provide a chance for people, including youth, to experience more areas of the property.

“I think it’s amazing that kids have an opportunity to ride somewhere close to home and develop the skills in a safe park.”

Young said Westhills Land Corp. has been instrumental in the expansion of the park by turning a portion of land in the area over to Langford. That includes 35 acres that will be transferred to Langford within the next several months.

He said the clubhouse to be built will become the focal point of the bike park and will feature an outdoor patio, eatery, bike repair and rental facilities, office space for Cycling Canada and Cycling B.C., and a community meeting area.

Construction is expected to begin in the coming weeks and be complete in 2023, Young said.

The Lunn family has donated $150,000 to the project from the proceeds of the Road2Recovery Campaign set up after Jordie’s death.

Jordie’s brother, Craig, said his family is pleased to be involved with Langford in the continued development of the bike park.

“The next phase of development, including the clubhouse, will bring more biking opportunities to the community and Jordie would be so proud,” he said. “We are immensely grateful to everyone who has supported, fundraised and donated to contribute to the Jordie Lunn Bike Park.

“We look forward to sharing these facilities with the entire cycling community.”

Brian, Jordie’s father, said the family appreciates what has been done with the park.

“We think it’ll be a great thing for the young kids,” he said. “I look forward to coming to the new clubhouse and get a cup of coffee, that’ll be great.”

Erin Waugh, chief executive of Cycling B.C., said her organization is thankful for the park facility “and this opportunity for this community to experience cycling.”

“We think that our sport is growing still in Canada,” she said. “Lots of people participate but not very many people necessarily recognize it as a sport they can compete in.”