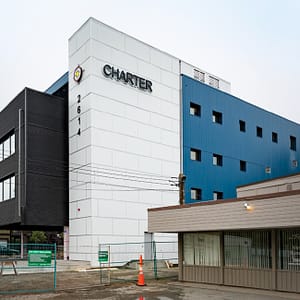 Founded 25 years ago, Charter Telecom is a high-tech company that builds, maintains and operates secure, high-performance communications networks and data centre infrastructure for large public and private sector clients around the world. In a sector where employee retention is an ongoing challenge, Charter views its workforce as a family. Many of its staff of over 100 have been with the company for two decades or more.

With this corporate philosophy, the company’s primary objective was to create a new headquarters building that would provide its employees with the best possible work environment. To realize this goal, the company was willing to embrace two non-traditional approaches to building design that are still in their infancy in Canada: Passive House and mass wood construction. Both these approaches were made more challenging by the restricted site, which quickly became the main driver of design.

On the narrow, 20-metre wide lot, the entire width would have been taken up by a conventional surface parking arrangement with a central drive aisle and two rows of cars, while the ramp to an underground garage would have reduced the number of stalls that could have been accommodated. Instead, the decision was made to minimize the ground floor footprint of the building and to bridge the upper three floors over a drive aisle and single row of surface parking. Zoning required a six metre setback on the west leaving a narrow strip on the east side for shear walls to come all the way to the ground. In a high seismic zone, the resulting lateral forces could not be resolved using light wood frame construction, so a hybrid solution was required.

Cost and schedule constraints, together with potential thermal bridging issues with other materials, led to the choice of wood structure above grade. CLT and glulam were used where the structure was doing hard work, with prefabricated light wood framing where forces were less demanding. Using prefabricated mass wood components required a change in design approach. All consultants had to accelerate their detailed design and resolve potential conflicts using a 3-D model, which was also used to coordinate trades. This was the only way to capitalize on the efficiency and speed of CLT construction, enabling custom milling of each piece in the factory and minimizing modifications on site.

The resulting structure is unusual. The upper floors are supported on the east side by a row of steel columns, while the west side is supported by the narrow ground floor structure, comprising mechanical and storage rooms, stair and elevator shafts and shipping and receiving areas. The two sides are connected below grade by a series of concrete foundation walls and spanned by glulam beams to support the CLT floor deck, acting as a robust shear diaphragm. Steel columns support the west side, tied together by a steel beam to create a moment frame that takes the “twist” out of the building in a seismic event. The ground floor spaces on the west side are separated by CLT shear walls that rise through the building to the roof.

Graeme Verhulst is a Principal of Waymark Architecture in Victoria, BC.