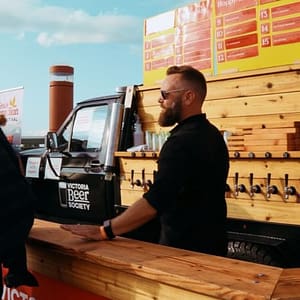 Langford Station has a whole new look and it is sure to be the place to be every Friday night throughout the summer!

The station turned community hub will celebrate its grand opening and first ever Friday at the Station event on Friday, May 20th with cold drinks, delicious food and plenty of shopping.

The weekly pop-up summer series is hosted by Victoria Beer Society who will also be on site serving up cold sleeves and flights of craft beer each week.

In May 2021, plans were announced to revitalize Langford’s Station Avenue area into a community hub and dog park.

The City of Langford, in collaboration with the Island Corridor Foundation (ICF), set out to restore and revitalize the area specifically between Peatt Road and Veteran’s Memorial Parkway.

In August 2021, applications opened for businesses and artists to apply to be a part of the hub, which would include small cabin-like structures with open windows for vendors to sell goods and parking spots for food trucks.

At noon on May 20th, Langford Mayor Steward Young will be tapping a cask-conditioned beer to kick off the ribbon cutting for the new arts and cultural district revitalization project.

Every Friday after that throughout the summer until the end of August, visitors will be able to enjoy live music, a selection of delicious food trucks and browse local businesses and artists’ studios.

Is there a better way to kick off a weekend?

Grand opening of Langford Station kicks off on May 20th with launch of summer series (victoriabuzz.com)