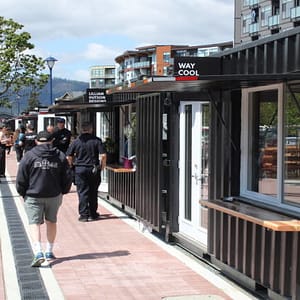 An underutilized and formerly run-down lot along the railroad tracks in Langford is now lined with retrofitted shipping containers and other improvements as it looks to nurture arts, culture and business.

Langford teamed up with the Island Corridor Foundations to revitalize the spot at the corner of Station Avenue and Veterans Memorial Parkway. The site is called the Langford Station Cultural District and opened on Friday.

As the community grows and as the downtown densifies, the people living in new central condos and apartments will need a place to connect with the community, Mayor Stew Young said at the opening.

Larry Stevenson, CEO of the Island Corridor Foundation, said that while they’ve long been pushing for a return to rail, ensuring the line’s infrastructure is going to good community uses has also been their focus.

The district hopes to let artist showcase their talent and let emerging businesses test the waters of the marketplace before they commit to a brick-and-mortar location.

Julien Pilon, owner of the Grumpy Cartoonist, said running his business out of his home didn’t give him the opportunity to interact with people. His work now has a central home in one of the shipping containers.

“This is an amazing opportunity for myself, my fellow artists (and) my fellow business owners to get a spot where we can build community and work and interact and showcase our talent,” Pilon told a crowd that had assembled for the district’s unveiling.

Friday’s opening revealed the first phase of the project. The next step is to add overhead as well as interactive lighting, murals and locally-designed sculptures. Phase one was funded by the Union of British Columbia Municipalities gas tax fund and two grants.

READ: New beer festival on tap this summer in Langford