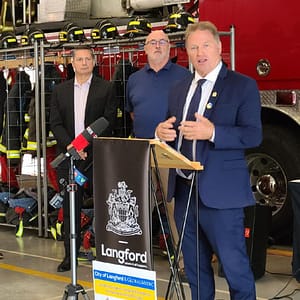 Today at City of Langford Fire Hall #1, it was announced that with already the support of $500,000 in recent donations, that Langford Mayor Stew Young — together with Langford Fire Chief (Ret) Bob Beckett (vice-chair of Sooke School District SD62), Global Medic volunteer Shawn Carby and a volunteer videographer (unnamed) — will be heading to western Ukraine to do what they can to help.

As a local relief team the focus will be on providing food to people who’ve been displaced, including seniors who have not left the country due to immobility. The focus on food security in one heavily affected Ukrainian city will include the preparation and distribution of meals and meal kits to Internally Displaced Peoples and local families who face many barriers to access food.

“The main focus is to get the right aid, to the right people, at the right time,” said Beckett to the crowd of about 50 people in attendance.

As well, Mayor Young was pleased to announced that Langford will connect with the mayor and member(s) of parliament at their Ukrainian city destination, forming an official bond as ‘sister cities’.

In an effort to help stabilize the local economy and create jobs, displaced Ukrainians will be hired and paid to help prepare and pack meal kits in the affected city. The project’s secondary focus involves the donation of much needed gear for firefighting and rescues to GlobalMedic’s sister charity, GlobalFire.

Since the launch of an unprovoked and premeditated invasion of Ukraine back on February 24, the Russian military has devastated communities, brutalized citizens and disrupted all facets of life for the people of Ukraine. More than 6.6 million Ukrainians have fled to neighbouring countries and 8 million Ukrainians have been internally displaced in the fastest-growing refugee crisis since World War II.

A Langford legacy of helping:

The City of Langford has a long history of supporting and assisting communities both in Canada and abroad who are impacted by emergencies and disasters (including in New York City after the 9-11 twin towers attack, as well as in Haiti after the earthquake there in 2009). Mayor Young went on the New York City trip in 2001; Beckett (then fire chief) was on both those missions.

The City of Langford assisted with the Afghan situation by providing $350,000 in used fire gear. Two fire trucks were donated to a local town fire hall in Mexico.

As the conflict in the Ukraine rages on, the City of Langford has partnered with GlobalMedic to provide aid and support to the victims of this humanitarian crisis. GlobalMedic is an experienced Canadian charity that has responded to the ongoing crisis as well as supported vulnerable families in Ukraine and neighbouring countries since 2014.

Global Medic volunteer Shawn Carby will be using his own vacation time from his job at the Capital Regional District (CRD), in order to take part in the Ukraine mission. The Executive Director of GlobalMedic is Rahul Singh.

GlobalMedic calls the conflict in Ukraine “an ugly war”. The chair of the Langford Supports Ukraine Committee, Shannon Russell-Willing, said today that the war on Ukraine “won’t be ending anytime soon”.

“The City of Langford has stood with the people of Ukraine since the beginning of the conflict. Partnering with GlobalMedic gives us an opportunity to have a direct impact on the lives of Ukrainians who have demonstrated immense courage and resolve in the face of horrifying aggression from Russia,” said Mayor Stew Young.

The local relief team will depart later in June to immediately begin distributing support to the impacted city. The location will remain undisclosed until the team has safely returned to Canada. Video footage and reports to media will be provided after completion of the trip.

Young was pleased that half a million dollars has been raised in one week, to support the relief team’s trip and work on the ground once they reach Ukraine.

Langford will “be there for as long as it takes”, Young said today, regarding the support that the City of Langford and local community can provide. He said he likes to “make a difference in an area where the need is so great”.

Today Mayor Young said he will feel safe on the “relatively short” trip, as there are experienced GlobalMedic and other guides on the ground. The team will have access to a translator.

Young was pleased to have Colwood Mayor Rob Martin in attendance at today’s event, as the effort to support Ukraine knows no borders in the west shore region and Greater Victoria area. “There are times when it’s important to lead, and there are times to follow,” said Martin, in recognition of Langford’s initiative. “When everything is said and done, we are one community,” said Martin, who has served as Colwood’s mayor since 2018.

As of today, 19 Ukranian families have arrived in Langford, says Russell-Willing. That’s up from nine families just over two weeks ago.

The Langford Supports Ukraine Committee has provided ‘getting settled support’ to refugees in Langford, by helping them find housing, open bank accounts, arrange child care, and get jobs.

Student refugees have been accommodated within the SD62 school system in the west shore.

On the heels of a successful Langford Supports Ukraine Committee initiative this spring, to support refugees settling in the West Shore, the City of Langford is now targeting a fundraising goal of $300,000.

Anyone interested in supporting this humanitarian effort in Ukraine can donate online. Tax receipts will be issued to donors. By partnering with GlobalMedic, 100% of the funds raised are specifically used for the critical resources identified by this campaign to bring much needed aid to communities under siege. Donations will be matched by the Sprott Foundation, up to $150,000.