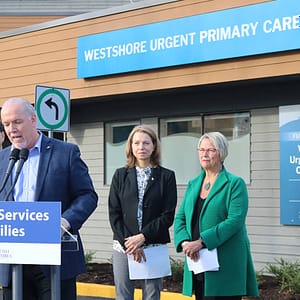 The province has announced a new urgent primary care centre will open in Langford next month.

The new Westshore Urgent Primary Care Centre at 582 Goldstream Avenue will be open from 8 a.m. to 8 p.m. starting on Nov. 5.

Premier John Horgan made the announcement on Friday in Langford. Horgan said launching an urgent primary care centre in the West Shore is important for communities in the area as almost one-in-five residents do not have a family physician.

“People want the security of knowing the consistent health care they need is available in their community, and the West Shore centre will play a critical role in delivering that care,” Horgan said.

“It will connect thousands of West Shore residents with primary health-care teams, and be there for same-day care as an alternative to waiting in an emergency room. Urgent primary care centres are an important part of our plan to deliver better, faster health care for people across the region and around the province.”