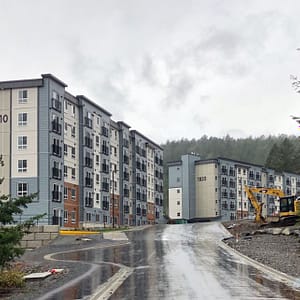 Spencer Close, a 130-unit complex in Langford along the 2700-block of Spencer Road, features one and two-bedroom layouts with in-suite laundry and available on-site parking. Qualification for one-bedroom homes requires an annual household income range of $42,500 to $74,150, while two-bedroom layouts are available with earnings of $56,000 to $113,040.

Cats are permitted within the first two floors of Spencer Close.

Meanwhile, construction of the CRHC’s West Park, a two-building, 152-unit collection of one and two-bedroom apartments along the edge of Thetis Lake Park, is now complete in the 1800-block of View Royal’s West Park Lane.

Suites feature a washer and dryer plus on-site parking as an option, and like Spencer Close, carry a minimum earning threshold of $42,500 annually for one-bedroom homes through to a maximum of $74,150, with two-bedroom homes requiring an income of $56,000 through $113,040.

Dogs are permitted within the first two floors of each building, as are cats.

The trio of six and five-storey rentals got underway in 2019 as part of the Capital Regional District’s Regional Housing First Program (RHFP) that together with Spencer Close and West Park has delivered 414-units out of a 2,000-unit affordable housing goal. A two-building project, completed in 2019 along Millstream Road at Treanor Road in Langford, initiated the RHFP with 132-units.

In 2021 the CRD expects to complete an additional 192-units under the RHFP with Hockley House, a six-storey lowrise nearing completion along the 800-block of Hockley Avenue in downtown Langford, and Cedar Grove, a 72-unit effort under partnership with the Victoria Cool Aid Society that recently got underway at 210 Gorge Road East in the City of Victoria. The latter will replace 21-units of end-of-life affordable housing.

Two projects slated for the West Shore’s District of Sooke will yield a further 245-units by 2022 within complexes on Charters Road and Drennan Street, and 56-units are earmarked as part of a woman’s housing initiative on Salt Spring Island.

By 2023 the CRD anticipates the completion of Michigan Square’s redevelopment, currently a 62-unit affordable apartment along the 300-block of Michigan Street in Victoria’s James Bay neighbourhood. Michigan Square’s replacement will deliver 53 homes under the RHFP and a further 53 outside of the program, bringing the RHFP’s current total of completed, proposed, approved and under construction inventory to 960-units.