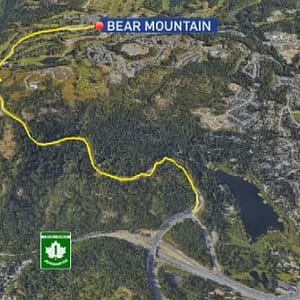 It’s been 15 years in the making but the Bear Mountain Parkway extension in Langford is now open, creating safer and alternate routes for drivers and emergency vehicles.

The 3.6-kilometre stretch of new road connects the Leigh Road Interchange to the existing Bear Mountain Parkway located at the Country Club Way.

Before the extension, the only way to access the Bear Mountain Resort and nearby developments was to take the existing parkway from Millstream Road.

The highway was paid for by developers but halted due to the 2008 recession, garnering it the nickname of “the road to nowhere.”

The new access point will alleviate congestion and provide emergency vehicles with another route to the resort.

Langford Mayor Stew Young says the project has been long-awaited and will bring more than a couple benefits to the community.

“It’ll just help spur on the economy up here with the jobs,” said Young. “And what a beautiful road when you drive down it and you see the views all the way out to the ocean and Sooke and Victoria, it’s a pretty amazing stretch of infrastructure.”

First responders are also fans of the new connection, saying it’ll give them one more way to access those in need.

“As the city continues to grow, more traffic congestion, so this just helps spread that out a little bit and makes it easier for us to get to where we need to be in an emergency,” said Langford Fire Chief Chris Aubrey.

With construction of an extra lane at the nearby Millstream overpass on pace to be completed in a month, drivers in Langford say they’re getting some long-sought relief from gridlock.