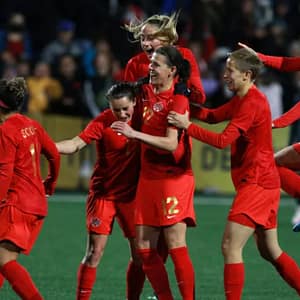 Canada’s women’s soccer team did enough to salvage a draw with Nigeria in a match coach Bev Priestman characterized as “frustrating.”

Shelina Zadorsky headed home a cross from Janine Beckie in the 88th minute, much to the delight of a boisterous sold-out crowd of 5,434 Monday night at Starlight Stadium in Langford, B.C., as Canada drew the visiting Nigerians 2-2 in a friendly.

In another high point for Canada, captain Christine Sinclair added to her legend, increasing her record tally with her 189th international goal.

But the Olympic champions fell behind early when Ifeoma Onumonu played a cheeky backheel past starting goalkeeper Kailen Sheridan in the fifth minute. It came off a free kick that bounced around in front of Sheridan, who had little chance.

Canada immediately pressed and carried much of the play throughout the game. Its best early opportunity came off a free kick by Adriana Leon, which was deflected just over the bar by diving Nigerian keeper Cynthia Nnadozie in the 19th minute.

Beckie then rattled a left-footed offering off the goalpost midway through the half and Kadeisha Buchanan’s follow-up was thwarted by a host of Nigerian defenders off the ensuing scramble.

“There were a lot of positives from this game, but it was frustrating” said Canadian coach Bev Priestman. “We had something like 20 shots, but couldn’t find the back of the net. These two games in B.C. were valuable exercises. We saw the real Nigeria tonight.”It was the second consecutive meeting in a span of four nights against Nigeria as the friendly series concluded. Canada downed the touring side 2-0 on Friday at a much warmer B.C. Place in Vancouver.

Sinclair was substituted into the game at halftime and wasted little time in evening the score at 1-1 in the 49th minute. Sinclair chipped a left-footer by Nnadozie, who was caught well off her line when her pass was gobbled up by Sinclair after some miscommunication among her defenders.

The tie lasted just four minutes though as Busayo Ajibade’s cross sailed over her intended mark, but substitute Canadian ‘keeper Sabrina D’Angelo played for the deflection and watched helplessly as it sailed behind her.

The crowd was unfazed, however, coaxing the home side with constant applause, cheers, whistles and some old-fashioned drumming.

The Canadian women ventured to B.C. as part of a celebration tour, recognizing the gold medal they claimed at the Tokyo Olympics last summer.

Canada, ranked sixth in the world, played in red jerseys with each player’s name and number emblazoned in gold in recognition of its medal. Nigeria, meanwhile, wore a less than traditional forest green and sits at No. 39 in the world rankings.

Numerous fans wore the red of Canada to the Monday game and were treated to a fine night of footy, Island style.

“The Island has embraced us and the game, and Pacific FC (of the Canadian Premier League) has done an awesome job,” Priestman said entering the game.

The two B.C. fixtures were more than just a friendly for Priestman as Canada begins preparations for the eight-nation 2022 CONCACAF Championship from July 4-18 in Monterrey, Mexico. That tournament serves as the qualification route for both the 2023 FIFA World Cup in Australia and New Zealand and the 2024 Paris Olympics.

Priestman brought 21 of Canada’s Olympic-champion players from Tokyo to B.C. and added seven additional recruits to the mix. The 21 were recognized pre-game with Sinclair receiving the largest cheers.

On Monday afternoon Prime Minister Justin Trudeau paid a surprise visit to the members of Canada’s team ahead of the match.

“I thought I’d let Justin deliver tonight’s pre-match speech,” said Priestman as the prime minister walked onto the pitch where the team members were doing some afternoon stretching exercises.

“Congratulations,” said Trudeau, adding the team has captured the hearts of Canadians and especially young girls. He said the accomplishments of the team are doing wonders for keeping girls playing sports in their teen years.

“It’s good to see the men’s team finally starting to catch up, because you guys are leaders,” said Trudeau, referring to Canada’s men’s team, which recently qualified for the World Cup.

“Thank you so much for everything you guys are doing,” added Trudeau, who was presented a red Canada T-shirt with Trudeau on back and the number 22.

The prime minister congratulated Sinclair — who also hit the crossbar in the 66th minute — for being “the top international scorer in soccer.” He joked that star goaltender Stephanie Labbé, who has now officially retired, could have auditioned for the minister of defence in his cabinet.