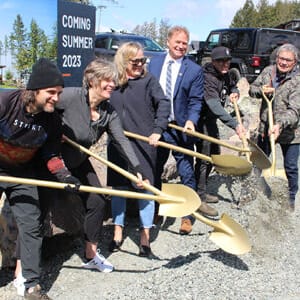 On a sunny cool spring Tuesday morning, the next phase of the Jordie Lunn Bike Park was celebrated with a clubhouse groundbreaking and nature trail ribbon cutting.

The City of Langford’s May 10 event drew out about 150 community leaders and members of the cycling community, the latter ready to roll on their bikes through the woods at the end of the hour.

The park and the clubhouse are unique to BC.

The addition of the clubhouse seeks to build upon the strong growth and demand for sport and recreation in Langford, with a further opportunity to provide programming and services. The city has for many years been building its profile as a national sports capital.

Clubhouse construction will begin in the coming weeks, toward a summer 2023 opening.

Funding for the project includes $150,000 in funds from the Road2Recovery campaign, donated by the Lunn family.

Jordie Lunn, 36, of Parksville, was riding with friends in Cabo San Lucas on October 9, 2019 when he suffered a fatal head injury. By February 2020 the City of Langford was already actively planning the Jordie Lunn Bike Park.

Cycling Canada is also on board. “It will further solidify a strong partnership between Cycling Canada and the City of Langford by bringing exciting programming and event hosting opportunities to the region,” says Matt Jeffries, Executive Director, Cycling Canada.

“This is the way we do it,” he told Island Social Trends regarding the balancing of providing green space within range of now higher-density urban construction development.

Whether residents want to hike, bike or just get outside and connect with nature in their own back yard, the trails provide that opportunity.

“This park is one of a kind on Vancouver Island and will attract visitors from around the world, supporting our local small business and tourism economy,” said Langford’s pro-business mayor.

The Gravity Zone features a variety of trails with ranges of difficulty. Cyclists and hikers will enjoy viewpoint lookouts and winding trails situated under massive tree canopies. Each trail was named by the trail building team who have worked tirelessly over the last few months to create the landscape for a special and unique experience.

At Tuesday’s event, Westhills Land Corp Manager Ryan McKenzie said the company has been working with Mayor Young, council and staff for over 15 years to develop community amenities.

There is also a 35-acre hilltop nature area currently under development on land donated by Westhills where walking and cycling will be available to the local community; toured by Island Social Trends last year, there were two ecosystems (rocky up high and riverside down below) that will hopefully be preserved to offer a variety of natural experiences in addition to built-up amenities.

Funding for the trails:

A grant from the province of BC (Community Economic Recovery Infrastructure Program) was awarded to the Vancouver Island Nature Trails Society to complete work on the City of Langford land and has contributed $336,113 toward the capital cost of the project. That funded the Ridgeline and Viewtop hiking trails and contributed to other various trails, according to a city news release.

An additional $150,000 grant was provided by 4VI (formerly Tourism Vancouver Island) through the Targeted Regional Tourism initiative, which funded the blue flow trail. 4VI President and CEO Anthony Everett said it’s exciting to see another project move forward from within the $2.3 million Targeted Regional Tourism Initiative. He said both residents and visitors will benefit from the new trails amentiy.

The remaining budget was funded by the City Parks Developers Cost Charge (DCC) fund — fees levied from developers whenever they commence on a new building project.

Langford Mayor Stew Young in his remarks on Tuesday talked first about the history of the area, saying about 25 years ago “Council had the version to purchase about 16 acres of forested land otherwise known as Paradise Falls”.

“With the support of Westhills Land Corporation we’ve been able to expand the park to 130 acres. So this is a long term vision that we’ve talked about as a council, reserving the green space in areas. I know it’s been sitting here 22 years, Paradise Falls, but protected for something as great as this to happen today,” said Mayor Young.

“This is one of the best projects, especially one of the best volunteer projects that Langford has ever taken on,” said Stew Young. He thanked everyone for the work they’ve done up to this day.

He noted that the upcoming clubhouse “will be the focal point” of the Jordie Lunn Bike Park.

Clubhouse and expanded trails… all of it builds upon the strong growth and demand for sport and recreation in Langford, the mayor explained.

Young says the park will attract visitors from around the world, supporting a local business and tourism economy.

Leadership on the day:

Attending the May 10 event at the Jordie Lunn Bike Park from the City of Langford were Mayor Stew Young and Councillors Lanny Seaton and Denise Blackwell, as well as CAO Darren Kiedyk, and Manager of Parks and Recreation Yari Nielsen and Dean Tennant who has worked on the trails and is project manager for Gravity Zone.

The family of Jordie Lunn was part of the special event — Jordie’s mother Bonnie Lunn, brother Craig Lunn, and father Brian Lunn. “Jordie would be so proud,” said Craig at the podium. Brian Lunn said the trails are first class.

Westhills Land Corp Manager Ryan McKenzie was proudly part of the day. As Langford’s top staffer said at the podium: “Without Westhills we could not be here today because much of the park is on land that they’ve either licensed or given to the city.”

Erin Waugh of Cycling BC was there as well as Calum Matthews from 4VI, as well as Kimberley Nemrava of the South Vancouver Island Nature Trails Society and John Watkins who is president of Wheelhouse Cycling Society.